Andy was a member of VTAM, and joined the committee in October of last year… Unfortunately, Andy lost a short battle with cancer on June 27th. 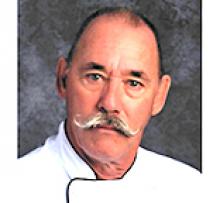 It is with great sadness that we announce the sudden passing of Andrew (Andy) Ormiston Saturday morning June 27, 2020, at Saint Boniface Hospital in Winnipeg following a brief struggle with cancer.

Andy was born in Abbotsford, West Sussex, England, the eldest of seven children and came by boat and train with his parents and siblings to Wakaw, Saskatchewan in 1959. Andy had a lifelong passion for gourmet cuisine and quality spirits. He started his culinary career slinging beer at the bar in Outlook and worked his way through table service, chef’s training, and various commercial cooking assignments. Ultimately, Andy got an education degree at the University of Saskatchewan and worked with dedication and passion as a culinary arts instructor at both Crocus Plains Regional Secondary School in Brandon and Lord Selkirk Regional Comprehensive Secondary School in Selkirk. The accomplishments of his students were his great pride. As an enthusiastic traveller, Andrew’s youthful adventures in Europe provided endless anecdotes which he used to encourage his students to explore the world.

Andy kept in touch with friends, colleagues, and family even when distances were great. An avid sailor in his time off, he liked to spend time with his wife Debbie, on their boat in Northern Harbor on Lake of the Woods. Andy will be remembered for his ready sense of humour, his hearty laughter, and his generosity.

Sorry, the comment form is closed at this time.